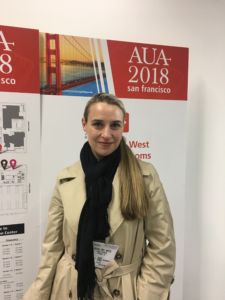 Dr. Bush presented PARC Urology’s data for patients undergoing hypospadias reoperations after multiple failed repairs done elsewhere. She compared the graft measurements in a group of patients who received Hyperbaric Oxygen Therapy (HBOT) versus a group of patients who did not. Even though the patients in the hyperbaric oxygen HBOT group had failed more previous surgeries, their grafts were healthier with the oxygen therapy compared to those who did not have HBOT. This is important because it is the first time it has ever been shown that grafts can be improved in patients with multiple prior hypospadias surgeries. HBOT has been used to help chronic wound healing problems for other diseases, such as in diabetes, but has never been shown to help hypospadias patients until now. During HBOT sessions, patients are given 100% oxygen to breathe while a machine pressurizes, like what happens on an airplane. The combination of the oxygen and the pressure has been shown to grow new blood vessels in tissues after 15-20 HBOT sessions. In addition, some doctors believe stem cells are produced by HBOT therapy to help tissues heal. In patients who have had multiple penile surgeries and are at risk for healing with complications, HBOT may help decrease that risk by improving the graft – which ultimately will make up the new urinary channel. Click here to read the abstract. For our younger patients, one clever mom prepared her son for HBOT sessions by describing that he would go in his own space ship after he got into his “astronaut” pajamas, read him some books about space, and took him out for freeze-dried “space” ice cream afterwards.